Alec Huxley is an emerging artist based in San Francisco, who headlined our Monochrome & Color exhibit in the Mission. As a feature in our “Vivencias” interview series, Alec talks to us about his growth in the art industry, recent foray into 3D modeling, and tells us what inspires his overall design process.

(VC) Outside all your accomplishments and an impressive body of artwork. Who is Alec Huxley?

(Alec) Just another speck on the mote of dust suspended in the sunbeam, immensely fascinated and grateful for that awareness and these moments.

(VC) Your triptico collection featured at our black white, monochrome and color collaboration with Wonderland San Francisco was a hit with the turnout of attendees. Looking back, where there any challenges on the creative process based on the black and white requirements, or it was just another day at the office for Alec?

(Alec) That was a really great show. At the time I was painting almost exclusively in black and white so pushing myself to render a daytime scene for the color panel was the challenging part. There was a story connecting all three pieces that I don’t remember all of, some Hitchcock type murder mystery starting in the city leading to a seedy desert motel then the color panel was the final escape to the open road. Ultimately it ended up being my favorite of the three and helped influence a series of colorful, desert-themed paintings I included in my first solo show the following year.

(VC) Creatives professionals need some kind of business smarts, How do you engage as an artist in a very large competitive market, do you have good lawyers or represented by any agency for your day to day engagements?

(Alec) I don’t have an agent or a manager. For the work I do, which is primarily fine art, I think it’s expected you take care of most things yourself. I do have a business degree and graphic design courses I took after that provided some practical tips but mostly I’ve had to educate myself on things like copyrights and contracts and when legal matters arise I’ve sought professional assistance.  As an emerging artist running the gauntlet of shady dealers and late payments I ended up finding some genuine people who really value creativity and have acted as great advocates for my work. Some people never find one and I’m realizing how lucky I am to have found a few.

(VC) As a artist in today’s America who maybe considered privileged based on your massive collective output, what can you candidly tell the young aspiring artist or entrepreneurs about discipline and risk of the art business?

(Alec) Well it definitely seems like I’m still getting started. I’ve been working as an artist full time for ten years now and I’m only just getting comfortable with the creative process and beginning to understand some of the truths in all the cliche things I’d heard about the art business. That it’s a grind. A long grind and you’ll eventually face self-doubt, which I still do, and at times you might quit or think about quitting or think all your work is terrible, which I still do, but it’ll feel like there’s no other choice but to keep creating. It really does seem to be all about discipline. Following that journey where you make some good work and a lot of bad work and the great work you’ll make later is only possible because of all of the work building upon itself. And while you’ll be doing things for other people you have to always be doing it for yourself. And that all feels like gambling. There’s a risk that no one will like your work or like it less than you were hoping so it’s temping to look at what’s popular and trendy and mimic that. And maybe that’s a strategy that mitigates some risk – I can’t speak to that path but I do think about it all the time! The seemingly guaranteed money and fame from making portraits of Marilyn Munro or Tupac or Hendrix with colorful drips and splatters. But I can’t fathom how you would write an artist statement or talk about a body of work or enthusiastically promote anything that didn’t come from real inspiration. It seems like to really manage risk you have to try and stay as true to yourself as possible and carve your own part of the art market. Clients know what to expect and come to you because of that and then you get to make the work that you like and you don’t have to worry about chasing trends.

(VC) Silicon Valley technology companies have moved into many art communities buying properties in places like the mission. Displacements similar to what happened in New York in the early 2000s and now. As an artist what are your general thoughts on this?

(Alec) I feel fortunate to have caught the last few years of the most recent creative “golden era” here. Obviously it’s a cycle that repeats and I’m not sure what you do about it but grit your teeth and watch market forces at work. It’s sad to look back on the creative drain though. It was odd to see the exodus to cities like Portland and Seattle where I’d lived for many years before, places that have now seen their own transformation via tech money. I’m still happy to be here and it feels like home for now and the city still excites me but it does feels like it’s still draining. As vast sums of wealth continue shifting around the same thing will happen somewhere else.

(VC) At this stage of your career considering your present commitments, if you could work alongside any notable personality or enterprise. Who would it be and why?

(Alec) Neill Blomkamp. The sci-fi blended with serious social issues and humor is amazing but he also seems highly intent on experimenting and pushing creative limits and that seems like something good to be around.

(VC) Tell us about your foray into 3D. Do we add motion graphics or broadcast designer to your repertoire?

(Alec) For some time I knew I wanted to get involved in that realm but wasn’t sure what or how. A chance invitation two years ago to a VR/Art event spurred me to begin learning the software and I started to engage in this industry that was right in my backyard but I hadn’t had much contact with. Film-making and animation have always been alluring and the computer was the way to get into that. I was immediately hooked on the tools and I’ve dove into 3D modeling, texturing, animation and environment design. The possibilities are overwhelming as everything is constantly updating. One of my first big projects was an animated version of my primary painting series with formally dressed characters wearing space helmets floating around the empty nighttime streets of San Francisco. The ability to quickly develop narratives is thrilling. It’s nice to take a break from painting and create in a different medium and they also compliment each other – I’ve used 3D software for mocking up concepts for new paintings and I’ve used 3D to create augmented reality components for existing paintings. 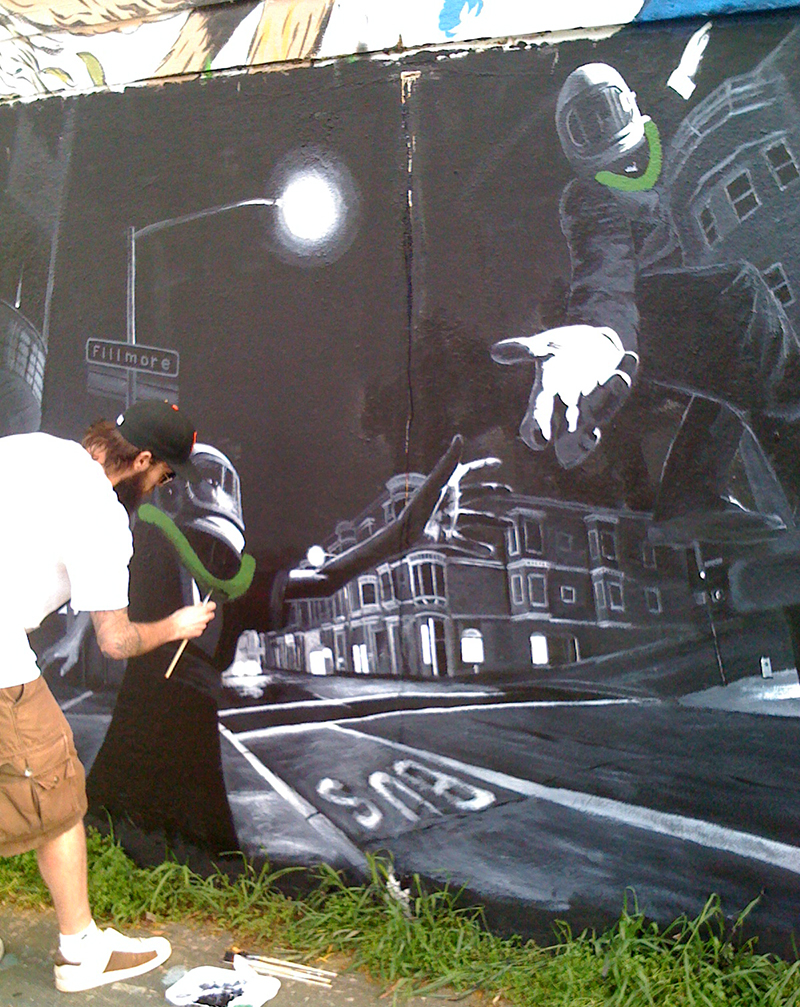 (VC) What kind of commercial or personal work can the world expect from Alec Huxley within the next 24 months?

(Alec) I’m trying to focus on a few painting themes already in progress, expanding on the Lil Dreamer space-kid series reflects my daughters growing influence, including more environments around California and the world and generally continuing to explore whatever narrative I’m on that’s about architecture and cites and ghost towns, space travel, wild animals and a dark and thrilling uncertainly about this whole peculiar trip.

And I’ll keep digging into 3D, augmented and virtual reality experiences. I’m working on some less flashy commercial stuff at the moment as well as some purely fun, more reflections on this strange journey.