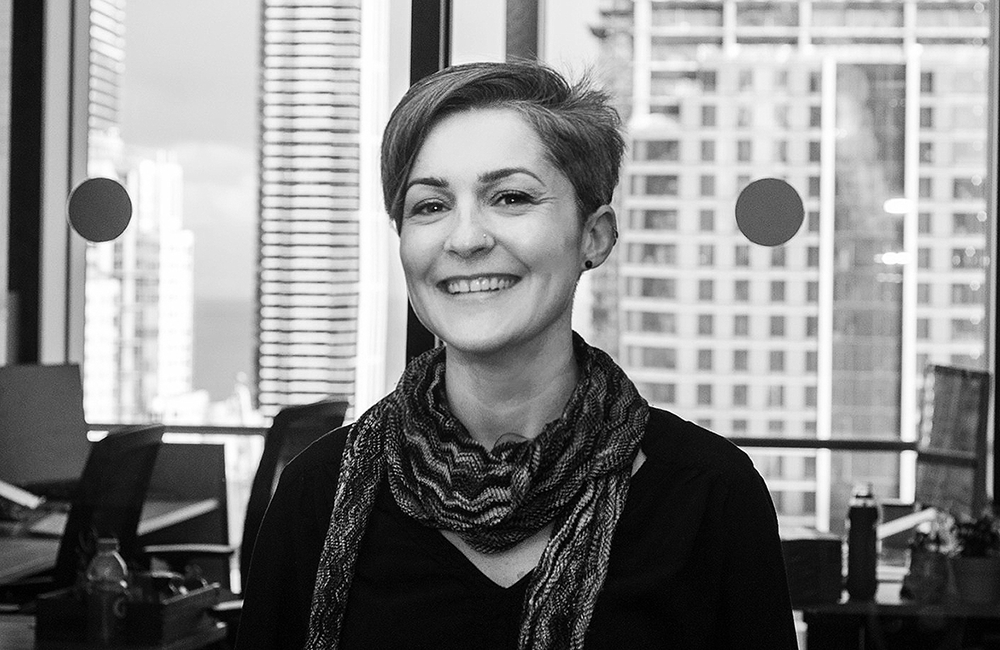 Valérie Alloix is a Creative Technologist based in San Francisco. She has worked with various open-source communities. During the height of the Flash era she learnt to program interactive experiences collaborating with technologists, innovators and artists. Starting her career in Europe and now based in Northern California, she tells us about her growth, being a woman in tech and her aspirations to contribute to the African continent where she spent some time during her early years.

You spent lots of time on the technology scene in Holland working with people around the world. You moved to San Francisco sometime ago. How has your adjustment been?

(Valérie) I have been in California for like 6 years and have built a good social network here. I like the nature area so I am outdoor a lot, compared to when I was in the Netherlands. I like the diversity. So far it has been a nice human experience. As for work I was into Flash development, when I moved to the United States Flash was dying. So I was going through a career change. When I was in Holland I worked with 3 different companies before being part of a freelance collective.

I had to prove myself, which I think is a great thing in life to prove yourself. Confront yourself in unknown situations.

We had many clients that provided constant work. It was a strong collective which our identity was tied to. We could work on whatever we wanted.

Coming into the U.S and changing careers, I had nobody to vouch for me. I had to prove myself, which I think is a great thing in life to prove yourself. Confront yourself in unknown situations.

Did you feel any kind of sadness starting all over again coming from the Flash community and the closeness it had?

(Valérie) I am sad that there hasn’t been a technology that replaced it. Flash had the ability to bridge people with very different drives. Mathematicians, broadcast designers, animators, graphic designers, game designers, people in education, data visualization etc. Flash had the capability to bridge because of the way the software was. Artists, designers etc. As of now I do not see any of tool bringing all these professionals together, this is something  I have regrets about. Perhaps the Unity community is still doing some of this.

Could it be the present technology industry does not present that kind of camaraderie?

(Valérie)  The fact that technology changes is to be expected. I am not looking backward and happy to see new technology rise. But I think the playfulness or the ability to iterate quickly with a broader group of people that are driven by different aspects of the multimedia creation, this is something that is lacking in the web ecosystem. Its difficult to iterate quickly.  The younger people now may not have good understanding of what the Flash community was like or was. The camaraderie back then is what we are missing today. There was lots of exploration and sharing. There was lots of sharing of code source and ideas. We are lacking this kind of inspiration. Its difficult finding that these days.

Let us talk about what you do now in Bay Area? You mentioned you were freelancing.

(Valérie)  The path I decided to take was a little different. I work full-time now and do not freelance anymore. When I moved to the United States, I moved with my daughter. She was 16 at the time. And the health insurance here is very much tied to your job situation. As a freelancer its more risky. I may go freelance again when she has more independence. Apart from not having an immediate network, the full-time route made more sense to me. I started with a small company which was about 45 people. I started as an architect for the web platform. We almost shut down a few years ago but we were able to bounce back. Right now we are all shareholders, valuing a healthy work or life balance. No big egos in the team, only chill people. [Valérie laughs] Something that I have really valued in my career. 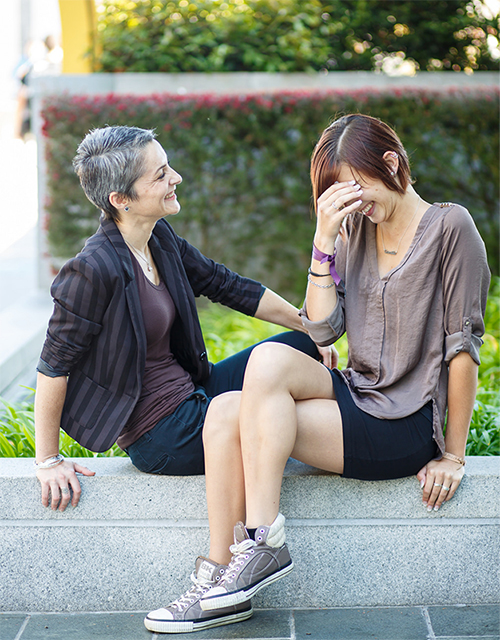 Valerie and Camille courtesy of Elimak

Hows the transition been for Camille your daughter?

(Valérie)  Camille liked the idea and the possibly of moving when it first came up. She told her friends and they thought it was great. At 16 you wouldn’t want to leave your friends in Holland, but she embraced the change. When She arrived in California, she could already speak english because it is widely spoken in Holland.

Many people from the Flash community where Techies and Artists who used the same authoring tool in different ways. You coming from that community (Experiences the same kind of vibe of an art community) and going into San Francisco, how has it been in the midst of technology companies?

(Valérie)  I have not really been here long enough to have a strong opinion. I would say the art scene has something to offer. There are pretty interesting things. There is more art and technology than “traditional art”, perhaps because of my perspectives and focus. I think Berlin is more interesting. Its kind of surprising. One would think San Francisco would be a little more disruptive. I think Oakland and Berkley have more excitement that San Francisco. It seems here many people are drinking their own cool-aid. [Valérie laughs]

As a woman in technology, you mentioned that you have some equity with the company you work. Would you say that there is more equality today?

(Valérie)  Its a question that I have been asked many times. I personally think equality does not exist. Some people have more opportunities than others, or some have more skill or strength than others. Its more philosophical for me I guess. Like an “ideal”. I have never felt discriminated upon in Europe or even here in America. My career has been kind of smooth sailing. For sure we are very few women in the field which is a fact. In a position where I conducted over 30 interviews, there were only 3 women. I met one lady who was very intelligent but she would react in a very defensive way. It turned us off. The culture within a team is very important, you want to keep it balanced. For instance, if your don’t have the buffer to onboard people, it’s risky to hire people who are too green. If you are working on a project that needs to be produced in a crunch time, you need team members that can communicate directly and efficiently and do not take things personal.

if you talk to your younger self what you would tell yourself just as you would advice any younger woman?

(Valérie)  In any field, I will say go with your gut on what is exciting for you. Believe in yourself and go for what you are naturally inclined to. Do not go into any situation or place to compete with anyone, the only person you compete with is yourself. Be inspiring, be someone who has drive, do something that makes you happy and share that happiness [Valérie laughs] 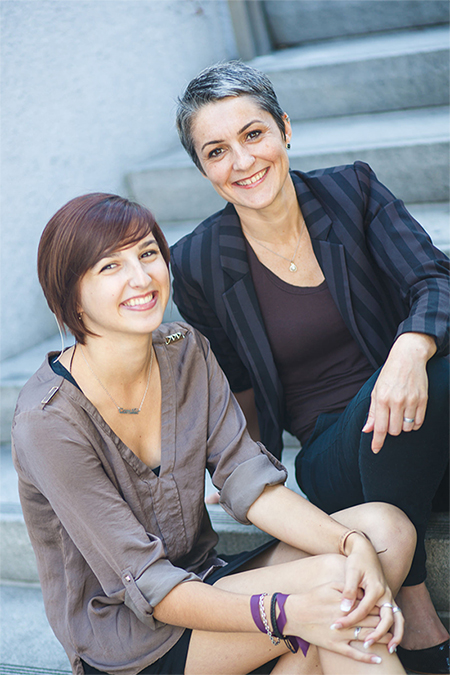 Camille and Valerie courtesy of Elimak

If you can time warp back in time what period with it be and why?

Are you spiritual or physiological, what motivates Valerie to stay motivated to say focused at work?

(Valérie)  I guess I am a little spiritual. How do your motivate me? I like to have lots of independence. I like when people are very direct with me. I do not like environments with gossiping, hearsay or any shit like that, it makes me run away in a heart beat. Autonomy, tolerance and authenticity is what I look for in my work environment.

When you get these opportunities and realize you have a chance to do something,  embrace it. Don’t waste the gift you have been given

What can the world expect from Valerie as a team or as an individual over the next 5 years?

(Valérie)  I don’t know what the world can expect. I know things I would like to do for myself as a human being.
I feel like an earthling. [Valérie laughs] . I am not sure if you were aware but I grew up in Africa. In sub-Sahara, in Niger, Mali and Central African republic.  I have been back to the African continent only once, in Morocco which is pretty different from sub-Sahara. I was there when I was 9 months to 11 years old. I would like to go back to Africa not on vacation but to be part of an incubator and maybe work remotely. Perhaps coming for a month at a time. My daughter Camille is 22, and as long she is my dependent I have to focus on her. Maybe with a U.S company or a project or incubator local to the African country. Kenya is booming, I also have family in ivory coast. I really would like to be close to the equator.