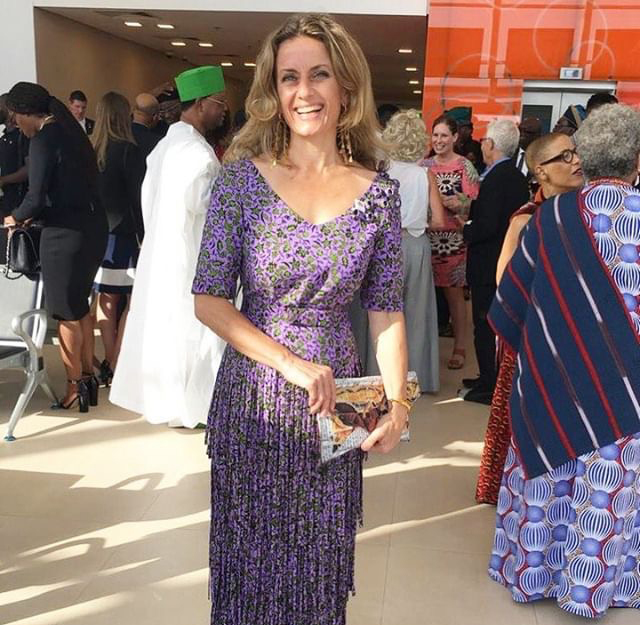 Polly Alakija is a British Muralist based in Lagos Nigeria. Her works are composed of paintings and objects such as the Cycle rickshaws called marwa in Nigeria, molue bus and Volkswagen Beetles. Here, we discuss about her work and aspirations as a resident of the melting pot city of Lagos.

You have lived in Nigeria since the 80s, this makes you an honourable citizen especially with a Yoruba last name. What can you tell us about your journey as a creative professional and artist in the country?

It’s been an interesting and dynamic journey. I arrived in Nigeria in 1989 and lived in Ibadan which was my late husbands home. It was challenging, moving from West London and with a European background, transitioning to a space which in those days felt very disconnected. This was before the days that we had cell phones or internet. My early days were spent learning local textile techniques and illustrating, mainly health educational material, which I enjoyed as it highlighted the need to find a visual language that was relevant to whichever community I was working in.

As new opportunities come along, my canvas has become broader and I find I can approach a blank canvas in a similar way as I would approach establishing an arts program.. 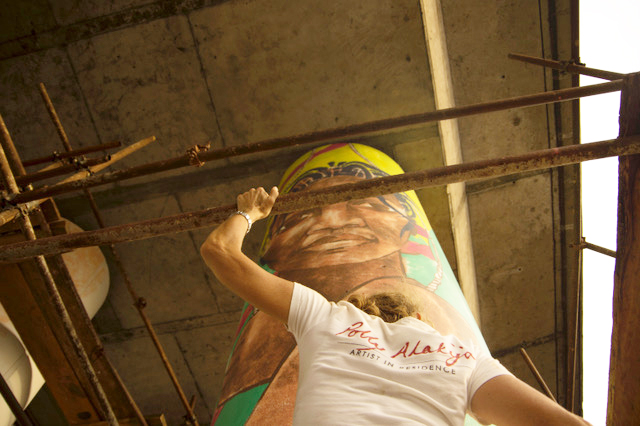 At the same time I continued my painting work and exhibited regularly at Alliance Francaise and Quintessence, a gallery in Lagos. Often over the years the greatest challenges have been really mundane practical ones : running out of basic paints, trying to source good quality brushes, canvas and stretchers etc. Looking back maybe I could say that being actively immersed into a town distant from all I had known before helped me also connect to it as I was forced to look at the space where I found myself : my references were it and me. My late husband being an Alakija, I never really felt like an “expat”. I had made a commitment to him and his home so my visual response came from an immersion not a transitory passing by. Now, being based in Lagos, which on one level is a very connected mega city, with a very dynamic contemporary art scene, the artists in the community can choose to embrace this connectivity and be a part of the global arts dialog. If I think about my journey it has led me closer towards being a “creative professional”. As new opportunities come along, my canvas has become broader and I find I can approach a blank canvas in a similar way as I would approach establishing an arts program, an educational workshop, or an urban space that needs regenerating.

You could be considered an outlier to the melting pot Lagos art scene, yet you are as involved merely looking at notable murals around the city’s local governments.

Well put : yes I am an outlier and quite happy in that space. I am a  honorary citizen, yet at the same time I am clearly from somewhere else. There is great benefit form this position and I am thrilled, entertained and inspired by what is coming out of that creative “melting pot” and it is an honor to find myself in a position to support and create opportunities in any way I can. Sometimes it is easier to be more effective as an outlier.

Those who know your work may or may not know who you are, could this be by design or lack of quality partnerships?

I realize that many people know my work and not me. Yes this is partly by design. Certainly in the public space the voice that I want heard is not mine : my role is to bring cohesion to a community and it’s about whatever community I am engaging in, it is not about my name.

The skills I try to develop may not be directly linked to being an “artist” but I try to concentrate on the soft transferable skills : communication, creativity, problem solving…

There is a huge mural under the Falomo bridge in Ikoyi which commuters in traffic see everyday. Sometimes tourists stand to take pictures of the beautiful pillar art forms of women. How did this initiative come about?

For a while I worked at James Cubitt Interiors, which is in the building adjacent to this space. My office overlooked this space which then was a dark no-go area, considered unsafe. I was amazed that such a location, with its millions of weekly passers by had not received more attention and I began to think about what I would do in the space. One day a bank painted some of the bridge legs dark green and I knew I had to change this : paint to me is like magic, an alchemy of sorts and needs to be respected and used as such. We needed magic in this space not muted corporate colors. With the kidnapping of the Chibok girls this space became intrinsically linked to the BBOG (Bring back our girls) movement. It was clear to me that any visuals in this space that did not acknowledge the suffering of these girls, and many others and their families, would be disrespectful. The faces were the relevant response to the recent history of the space and the receding strong flyover “legs” the perfect canvas on which to recognize female strength beauty support and resilience. The project was embraced by the celebrations of Lagos State turning 50 years old.

Your are an active participant of art education programs and its intersections in the Nigerian urban space, does your motivation as a mother and author of children books have anything to do with this?

Before moving to Nigeria I was teaching art, mainly to children so the roots of this work stem back to that, but of course was then reinforced by being a mother. Again, moving from West London to Oyo State made me question relevance and impact. Where does “art” fit in to a school where many children have little access to text books and the schools were in a state of disrepair. So transferring skills, sharing knowledge has always been part of what I do. The skills I try to develop may not be directly linked to being a an “artist” but I try to concentrate on the soft transferable skills : communication, creativity, problem solving. These are skills that are generally not encouraged in a system built on rote learning that does not encourage the development of the “enquiring mind”. I hope that the outcomes we help the children produce are always satisfying and help build self esteem. I have done murals in public spaces with hundreds of children, primary and secondary aged and this gives all those concerned great pride in themselves.

In your quiet or noisy moments how do you get inspired. What makes you create the work you do. Do you seek religion or get physiological like many artists for muses?

My most creative and productive moments are the moments when I get away from thought processes and my restless mind is put to one side. It is hard to say what inspires me other than it is a response to my love of life. My creative response is always one of joy and the desire to share that joy. I suppose retrospectively, after such a process, I can become philosophical, but the initial driving force is having a visual language : what I create is that voice. This is why I find it hard to write written descriptions of my work : it’s like being asked to make a translation, but at a certain point ,are words relevant to a visual language? If they were  I would be a poet.

Some mention the renaissance or the West African pan-African times as an art period they admire. If you can time-warp back to any era, what time would it be and why?

In my teen years I became very drawn in by the work of the Mexican Muralist Diego Rivera. Many art periods and traditions influenced his work form the Italian renaissance to Mexican historical art all of which is reflected in his work. DiegoRivera was instrumental in the development of the Mexican Muralists movement which was art of the people and for the people.

My most creative and productive moments are the moments when I get away from thought processes and my restless mind is put to one side..

At this stage of your professional career and accomplishments, If you could work alongside any other artist or curator who would it be and why?

At this point rather than work directly with an artist I would love to take “time out” and learn some new skills. I used to enjoy printmaking and I would love to spend time absorbed in the printmaking process. In a similar vein sculpting with clay and re-learning techniques . Traditional fresco techniques have always attracted me but I am not sure I would have the patience for the technical restraints and discipline needed.

You sit as a prominent board member in Lagos. Though a state part of a conservative country, Would you say there is traction on integrating art into more public spaces as therapy for many commuters?
This is something I have been working on and the current administration of Lagos State with His Excellency Akinwunmi Ambode as the Executive Governor has been most open to the conversation. Indeed we are developing an arts in transport infrastructure program. This could not only lead to considerably enhancing the arduous commute of some 13 million people daily, but would create excellent platforms for a plethora of art forms. I hope that we see continuity in this vision.
What kind of work can the world expect from Polly within the next 5 years?

I will continue to try to juggle my studio practice with developing programs in the public sphere.I certainly hope that I am able to work on a couple more urban regeneration projects. Having said that I have a tendency not to stick to the plan and instead I like to think I keep an open mind and respond to opportunities as they come along.

More on Polly can be found on pollyalakija.com