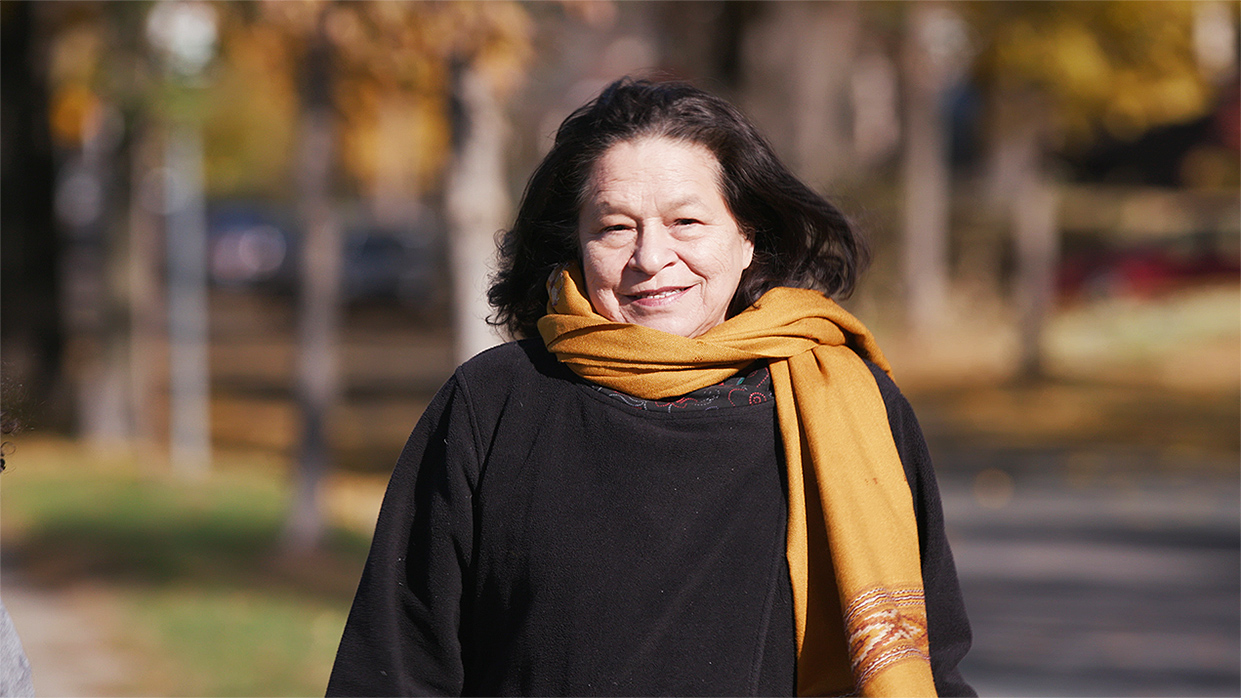 Marcie Rendon is an Award-winning playwright, poet and writer based in Minneapolis Minnesota. Her debut novel Murder on the Red River won the Pinckley Women’s Debut Crime Novel Award in 2018. In this interview we discuss an Ojibwe woman’s work, her collaborations and the Native American community she represents.

(VC)  Native American spirituality or the Ojibwe has a huge influence with your work. Has this always been the case and how important are these education levers for future Native American generations?

(Marcie) For myself as an Ojibwe woman, spirituality is intertwined with all of my existence. It is not a separate part of who I am or something I do ‘occasionally’. It is a way of life. And I can’t, or don’t, separate it from the everydayness of life because it is everyday. We are of the earth, the earth is of us. We are all a part of the much larger cosmos. A favorite quote of mine is a Buffy St. Marie quote. She says, “You think I have visions because I am Indian. I have visions because there are visions to be seen.” So much of what is considered spirituality has been ‘educated’ out of people in favor of only noticing the thinking brain instead of the whole of reality. I want my children and grandchildren to remember and be reminded of the totality of who they are.

(VC) Those who know your work such as novel the Murder on the Red River, may or may not know who you are, is this by design or lack of quality partnerships?

(Marcie) I have had numerous partnerships over the years and have absolutely no complaints about any of them. I have worked with Brent Michael Davids, an American Indian Composer to write lyrics for some of his compositions. I have worked with composer Ann Milikan. Both my children’s book, Pow Wow Summer and Farmer’s Market Families Working Together were collaborations with photographer Cheryl Walsh Bellville. I am also the creative mind behind Raving Native Theater which has produced Native theater and performance art here in the Twin Cities since the 1990s. Those collaborations, especially creating our piece Free Frybread, were some of the most fun in my life.

I think that often Native American people are invisibilized and that happens in the arts too. So to create possibilities not just for myself but for other Native people is something I strive to do.

As an introvert I am probably quite happy just letting my work speak for itself. A partnership I am working with now is the upcoming TPT Art Is.. CreativeNativeResilience public television show where three native artists, Jada Brown, Andrea Fairbanks and Sir Curtis Kirby III will perform live. It is exciting to work with others and see their creativity shine. I think that often Native American people are invisibilized and that happens in the arts too. So to create possibilities not just for myself but for other Native people is something I strive to do.

(VC) You have amassed a huge body of work and a very interesting background with awards such as the 2018 Pinckley Prize on Crime Novel and the Western Writers of American SPUR finalist award. Hows does this make you feel?

(Marcie) The Pinckley Prize and the SPUR Finalist Award were wonderful acknowledgements of my creative work. Both were an honor to receive. Both awards really acknowledge the beauty and strength of Cash, the main character in both Murder on the Red River and Girl Gone Missing.

(VC) Technology or industrial companies have moved into many art communities buying properties or spaces creating displacements just like when the rail was being created around Hiawatha. From your vantage point weighing the pros and cons, can anything positive come out of this?

(Marcie) We are at a time in human history where we are about to face the facts that as a human race we have created a world situation with the earth, water and climate, where humans as we know us, are on the verge of facing extinction. The continued belief in domination and control of the natural world, which leads to displacement of natural life, is a key issue that needs to be addressed by all in my opinion. It is the belief that needs to be addressed; and people need to arrive at a clearer understanding of what it might mean to live in balance and in harmony with the earth and each other.

(VC) In your quiet or noisy moments how do you get inspired. What makes Marcie create the work she does. Do you seek spirituality or get psychological like other creative for massive inspiration. What does self awareness mean to you?

(Marcie) I think that as an Ojibwe woman I have long known who I am, who my people are, and that I belong everywhere on this continent. There is zero shortage of ideas or inspiration. We live in a beautiful world and I try, often, to stop long enough to notice. The ideas will fill our minds and hearts if we open ourselves to them. I do not have a television, nor a radio.

We are kept in their mindset as “vanished peoples.” Or as workers, not creators. And what does this erasing of individual identity do to us? Can you believe you exist if you look in a mirror and see no reflection?

I live a quiet life. This allows for inspiration to flow to me I believe. In my artist statement I say: We are kept in their mindset as “vanished peoples.” Or as workers, not creators. And what does this erasing of individual identity do to us? Can you believe you exist if you look in a mirror and see no reflection? And what happens when one group controls the mirror market? As Native people, we have known that in order to survive we had to create, re-create, produce, re-produce. The effect of the denial of our existence is that many of us have become invisible…the systematic disruption of our families by the removal of our children was effective for silencing our voices. however, not (everyone) can still that desire, that up-welling inside that says sing, write, draw, move, be… we can sing our hearts out, tell our stories, paint our visions…we are in a position to create a more human reality…in order to live we have to make our own mirrors.

(VC) Some mention the renaissance as an art period they admire. If you can time-warp back to any era what time would it be and why?

(Marcie) The Native American art renaissance is happening right now in the state known as Minnesota. It is truly the heartbeat of Indian art in this part of the world. Writers Linda LeGarde Grover and Diane Wilson are winning awards. The Erdrich sisters and Truer brothers keep pumping out the manuscripts. Designer Sarah Agaton Howes of House of Howes is creating beautiful housewares, earrings and moccasins. Delina White creates absolutely stunning clothes. Karen Savage Blue is on a roll with daily paintings, many of which are for sale at the American Indian Community House in Duluth alongside the art of Leah Yellowbird, Steve Premo, and Michelle Waabanangagokwe Defoe. Here in the Twin Cities we have artist/singer Sharon Day, visual artist Jim Denomie, and Julie Buffalohead just to name a few. Performance artists are Thomas LaBlanc, Isabella LaBlanc, the New Native Theater folks. The Ikidowin Youth Theater Ensemble. Dancer Rosy Simas. And I am forgetting a hundred plus more. This is it. This is the time and place to be. 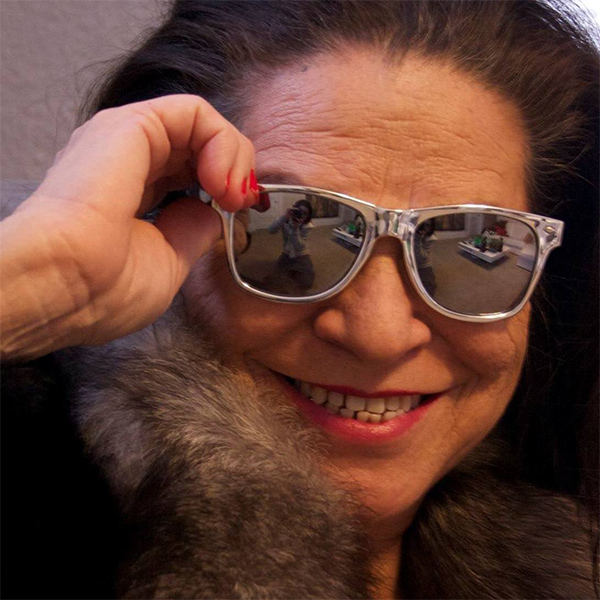 (VC) At this stage of your professional career and accomplishments, If you could collaborate with a brand or any public figure in the creative arts and humanities who would it be and why?

(Marcie) My next collaboration is with Crystal Norcross, a community artist/activist from the Dakota community. This fall we will be working on an art project about the incarceration of Native women. It is a project with deep implications because Native women are the most incarcerated women in the state currently.

(VC) What kind of work can the world expect from Marcie Rendon within the next 5 years?

(Marcie) I intend to keep writing more books in the Cash Blackbear series as well as another play that I have in the works. And as always I am writing poetry and maybe one or two more children’s books.

(Marcie) Please stop and remember Native people still do exist. Our work and voice is important to any conversation that is occurring. To Native people I encourage all of you to write, sing, record, do, dance. Our children of now and of the future need to hear our stories from our perspective so they will know who they truly are. Miigwetch.